My lovely neighbours have another grandson (their fifth!), and I again offered to make a quilt.

As before, I invited the baby’s grandmother into my sewing room to choose some starter fabrics and pattern ideas. We agreed to use a lot of the same fabrics that I included in the earlier baby quilt for the same family, but this time she spotted and fell in love with a monkey print, so I added green to the blues.

The baby’s grandmother was keen to include the monkey print.

The idea for this quilt came from the centre of an earlier round robin quilt. I did not use a pattern but put my Sew Easy 10-degree wedge ruler to good use. 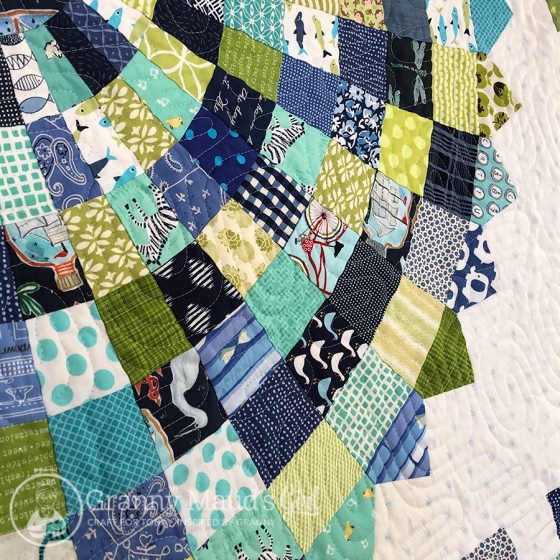 I tried to include as many fabrics as I could.

A large, scrappy Dresden plate was appliquéd to a piece of background fabric. Once I had the circle sewn down, I trimmed and squared the background to 40½ inches. This gave me a neat square to sew the border to.

After I had machine sewed the large circle, I appliquéd it to the background fabric.

The centre circle and the border are made up of 2½-inch strips, so this idea would suit a jelly roll. The smallest pieces of fabric were only 2½ by 1½ inches, so I was able to use up oddments in my stash and tiny pieces from my scrap box.

I have been trying to use up my stash where possible, so I only bought three fabrics: the backing, the binding and the nautical print that I used in the centre. I needed to buy backing and binding because I did not have large enough pieces in my cupboard, but a small amount of the nautical print was bought just because it was cute and would make an interesting centre.

The backing fabric I bought was 1.6 metres wide, much wider than normal quilting cotton, so I added a border to the quilt to avoid wasting any of the width. This meant that the quilt finished at a generous 52 inches (1.3 metres) square.

I added a simple border to frame the large circle.

The backing fabric I chose influenced the colours I used on the front.

It is a bit big for a baby quilt, perhaps, but there are lots of things for small children to look at: zebras, sheep, monkeys, whales, lighthouses, ducks, fish, elephants …

I had it professionally quilted with a pattern that makes me think of water ripples.

The same afternoon I finished sewing the binding down, my neighbour came to collect it. I did not get to admire my handiwork for long!

The baby’s grandmother held it up for a photo.

I really enjoy making baby things, but I have started putting in requests for someone to give birth to a baby girl. This is a purely selfish request: I need to make a dent in my pink fabric stash!

12 thoughts on “Circle in a square baby quilt”

I stopped actively updating this blog in 2021, but I do read and reply to comments, and I am still sewing, knitting and crocheting.
If you have been inspired by the projects or tutorials on this blog, please share your photos on Instagram (@grannymaudsgirl).
Carla