I keep forgetting to share my mini mini quilt adventures here as all the excitement happened over on Instagram.

Last year, I somehow managed to avoid getting caught up in the mini mini quilt phase – more from travelling and timing than anything else – but I could not resist swapping one mini mini quilt with Yvonne of Quilting Jetgirl.

First, I thought I would appliqué a tiny rocketship, but someone else had already made a mini mini spaceship for Yvonne. So, I switched to Plan B, which was to immortalise her cat, Puppy, in fabric.

I began by lurking about her Instagram feed and looking for a photograph of Puppy that I could use as a starting point.

I fiddled about in Illustrator and Photoshop until I had something like this.

I had to use spotty fabric as I did not have any black solids, but I used the spots to my advantage by carefully cutting the pieces so the strongest white stripes sat about where Puppy’s whiskers should be. 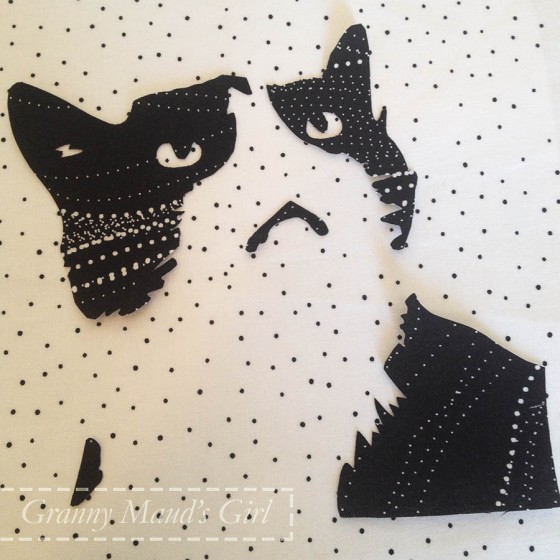 I traced the outlines onto fusible web for raw-edge appliqué.

After I had fused everything in place, I used some of the skills learned in a recent trapunto class to make Puppy a bit 3D. Then, I added another layer of batting and a plain white backing, and I free-motion quilted around the outlines a few times. 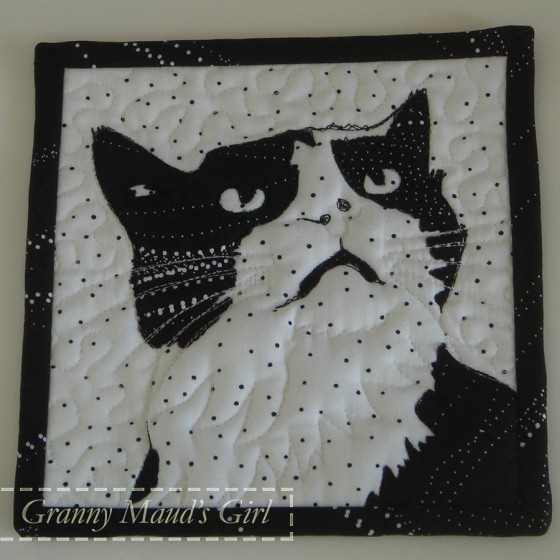 In trying to get Puppy’s nose freckle, I might have given him a wonky nose. Artistic licence!

The back was pretty neat as I buried all my threads, but I could not resist adding this Japanese print to the back.

What did Yvonne send me? A mini mini Mini quilt. In a funny twist, I was sewing Puppy for her as she was sewing Poppy, my car, for me! It is the cutest little thing.

For a closer look at the tiny quilt she made, her methods and the cute fabric she used on the back, I suggest you check out her blog post.

Look how the mini mini quilt Yvonne sent me looks right at home in my sewing space!

All finished and ready to mail.

36 thoughts on “Puppy and Poppy”

If you have been inspired by the projects or tutorials on this blog, please share your photos on Instagram (@grannymaudsgirl).
Carla