The knitted mess from my last post is finally finished! It did not look like much to begin with, but the marvels of blocking transformed it into a delicate lace scarf. 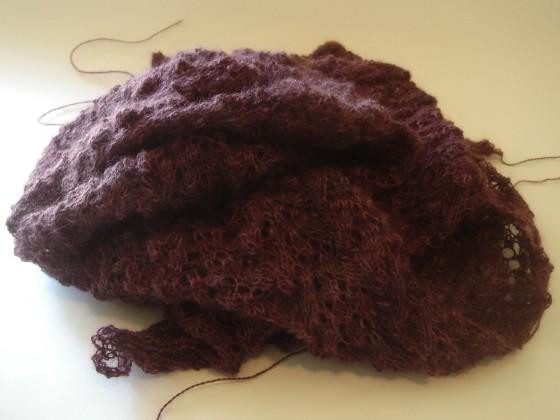 When it first came off the knitting needles, it looked like this.

I bought the skein of Misti Alpaca laceweight yarn a year ago simply because it was pretty; it ‘jumped’ into my shopping basket, so to speak. I thought I could knit it up quickly. After all, I only planned to make a scarf and it was only one skein. Easy! Then, I spent an age agonising over which Ravelry pattern to use, before choosing Benitoite by Tetiana Otruta. The pattern was great. All of the problems were due to my inexperience with knitting lace. When it comes to craft, I like to bite off more than I can chew and then chew like crazy. Knitting this scarf proved that. This scarf has taken me a year as I seemed to knit three rows and unpick two – or, more often, knit thirty rows and unpick twenty. Because of the lace pattern, when I made a mistake, I was not able to simply pull my work off the needles, unravel a few rows, and stick it back on the needles as I often do for non-lace patterns. I was unable to recognise each stitch in the open pattern well enough to do that. Instead, I had to unpick each stitch one by one. Not fun. I should have used more lifelines, but when I thought of using one, it was already too late. This was also a slow project for me because I occasionally got spooked. For example, when I picked up the stitches from the provisional cast-on, the knitting sat untouched for a few months until I was brave enough to try the new-to-me next step. This scarf included many firsts for me:

I did not even know that I had to rewind a skein before I could start knitting. I soon learned!

Before blocking, the lace pattern does not stand out too well.

I used interlocking rubber mats and almost my entire collection of quilting pins to block the damp scarf.

I should have checked the picture on the pattern, as I missed a few points. Perhaps I can do them properly next time when I wash it.

After blocking, the lace pattern is clear.

Finished! I feel brave enough to try other lace patterns now … as long as I am not working to a deadline.

The colour matches my coat!

My first knitted lace might also have been my first scarf. I certainly do not remember ever knitting a scarf before. Unlike most people who learn to knit by making a scarf, I started knitting jumpers (sweaters). Now, after all this work, who wants to bet that the first time I wear it I snag it on my jewellery and damage it? Or that I am so frightened by the idea of damaging a year’s work that I will wear it rarely?

22 thoughts on “My first knitted lace”

If you have been inspired by the projects or tutorials on this blog, please share your photos on Instagram (@grannymaudsgirl).
Carla